Bourtzi is a small peninsula which separates the port of Skiathos in two. In the past it was a fort, which was established by the Gizi brothers who occupied Skiathos in 1207. It was surrounded by walls battlements and embrasures and on the left and right of the gate there were two round towers. Nowadays, Bourtzi is really a rare recreation place. It is full of pine trees, always with fresh, cool air and with a magnificent view.

There are few ruins of the old fort and we can see, on the left and right of the street leading to the entrance of the old school, the sites of the church of Agios Georgios and of the fort tank. The old primary school has been converted into a picturesque cultural centre, with the initiative of the present municipal authorities. In it, there are practical conference rooms in good taste and a fabulous summer theatre which hosts successful theatrical and musical performances every summer.

Moreover, in Bourtzi there is a municipal cafe where special nights are held. These fit in with the ambience of the small, full of green peninsula. 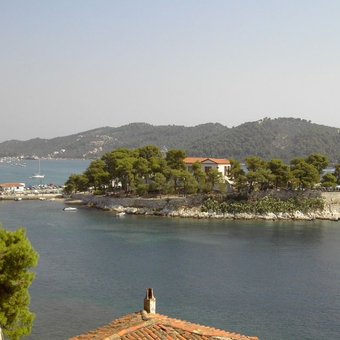 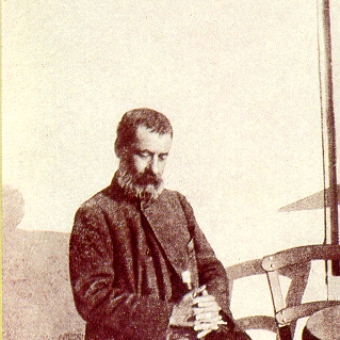 Papadiamantis is one of the most important scholars of modern Greek times. The house where Alexandros Papadiamantis was born on 4th March 1851 does not exist today. It was sold and the new owners put it down.

Papadiamantis grew up and died in the new house his father built in 1860, as it is said on a built-in inscription on one of its walls.

This house is located about 100 metres inland from the eastern coast of the city, in a narrow street which is a dead-end. It could be said that it is a sidestreet of the present Papadiamanti street.

Immersed in the greenery, deep in the Lekhounio gorge beside the springs in the place called Agalianos, under Karaphlytzanakia, the highest peak on Skiathos, stands the Holy Communal Monastery dedicated to the Annunciation of the Virgin, The Evangelistrias Monastery or Vangelistrias as it is called by the Skiathians.

Construction of the monastery was started in 1794 by a group of kollyvados monks who had been forced to leave the Holy Mount of Athos in the face of disturbances resulting from disputes over the celebration of Canonical Requiem Masses Saturdays rather than Sundays. The objective was a return to the tradition of the Ancient Orthodox Church.

The group leader was Niphon, an Ordained Monk, whose worldly name was Nicholas “from the line of the Nicholarades”, who was born in 1736 at the village of Patrika on the island of Chios.Â  He served in the Monastery of the Greatest Banner and the retreat of the Omnipotent on the Holy Mount of Athos. Initially he went to Samos, Patmos, Leipso and Icaria where, in 1775, he founded the monastery of the Annunciation at Leucada.

Amongst the monks at the Monastery of the Annunciation was one Gregorios Khadjistamatis, a Skiathian, who, upon the death of his father, inherited extensive property on Skiathos. Possessing this large estate Gregorios persuaded Niphon to move to the green island of Skiathos and establish a new monastery, abandoning Icaria “for the all-pervading barrenness and unwholesomeness of the place”.